“It was a double house, and a big open place betwixt them was roofed and floored, and sometimes the table was set there in the middle of the day – and it was a cool, comfortable place…” Mark Twain

This proposal looks to the dogtrot typology for inspiration. These 19th- and early 20th-century dwellings, found mostly in the American Southeast, were made to economically link two structures that shared a covered open-air space between. The dogtrot over the years had employed a highly successful passive ventilation strategy which was effective well before the advent of affordable, mechanized systems for cooling were available.

We aim to reposition the dogtrot typology as a legitimate housing prototype, towards responsible and lasting architecture whether as a single home or as part of an enclave of multiple units. Eating, sleeping and living spaces – including a loft which bridges over the breezeway that can be used as a second bedroom or home/office – take advantage of the simple pitched roof system. This results in a generous volume of space, making this small house seem comfortably large. The annexed space opposite the breezeway contains a flexible auxiliary room along with laundry facilities and a service closet.

The breezeway passage serves as covered porch and can be used as an additional outdoor room – whether standalone or clustered with others, it would provide a social armature where living could extend beyond the enclosure of the home proper.

DogTrot is predicated on straightforward construction systems with a local labour base in mind, taking advantage of the efficiencies of Structural Insulated Panel (SIP) based construction. This one-level structure will then be fully clad in continuous lapped cedar siding, from the roof ridge to the bottom of the walls. Vernacular in tone but necessarily modern in detailing, this house will aim to be a positive addition to the evolving typologies of building in New England or across North America.

Passive Systems: Our approach to the heating, cooling, and fresh air systems is to make them passive and efficient. By creating a tight envelope, increasing the amount of insulation, and encouraging the use of passive ventilation, DogTrot will use small amounts of energy to heat and cool the space. On-demand hot water, a heat recovery unit, and high efficiency furnace are three energy efficient components that our system requires. As Dog Trot is primarily an open volume, locating the units above the kitchen cabinetry eliminates all ductwork and simplifies the system diagram.

Unitized Construction: Structural Insulated Panels (SIPs) are a building material that provides the structural, insulation, vapor and air barrier, and in one prefabricated component. SIPs are typically composed of two layers of oriented strand board (OSB) panels with a core of expanded polystyrene foam sandwiched between. A 10” thick SIP can provide a highly insulated wall (R40) and together the panels form an energy efficient air-tight building envelope and act as their own structural system. The cost of building with SIPs is somewhat higher than traditional stick frame construction, however the life-cycle cost of the dwelling will be reduced due to the superior building envelope and efficiencies inherent in the system.

From ‘Standalone’ to ‘Cluster’: While DogTrot may be based on a known archetype, we offer here a prototype with a community quotient. The linear approach to DogTrot is reinforced in the cluster plan, creating a ‘passage’ that becomes a semi-public realm. The three units (possibly more) are strung together by a common boardwalk which is the ‘street’ for the cluster. Residents can gather for shared garden events, kids can extend their play environment, neighbours can be share workshop tools, and even collaborate on projects.

We believe the DogTrot Cluster suits the affordable housing principle with its built-in elegance as a physical standalone but also in how it can play a part towards time-honoured communal efficiencies. Our aim with the DogTrot is to provide an architectural construct in which the residents would live affordably, intelligently and responsibly. The spaces between the units are gardens or naturalized landscapes, depending on the existing site. In a forested site, the units can be slipped between the trees, the thin footprint allowing for few native trees to be removed. 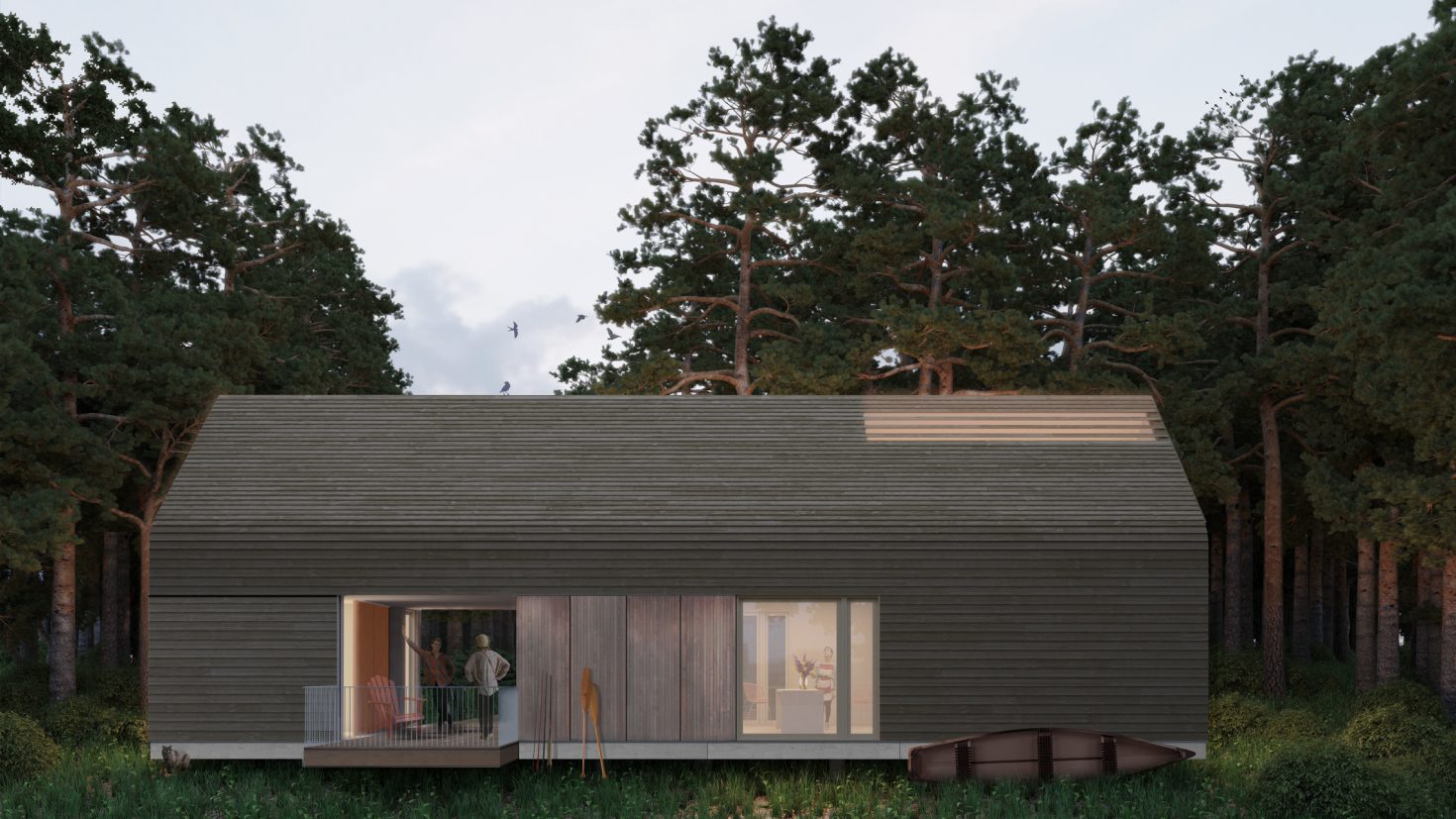 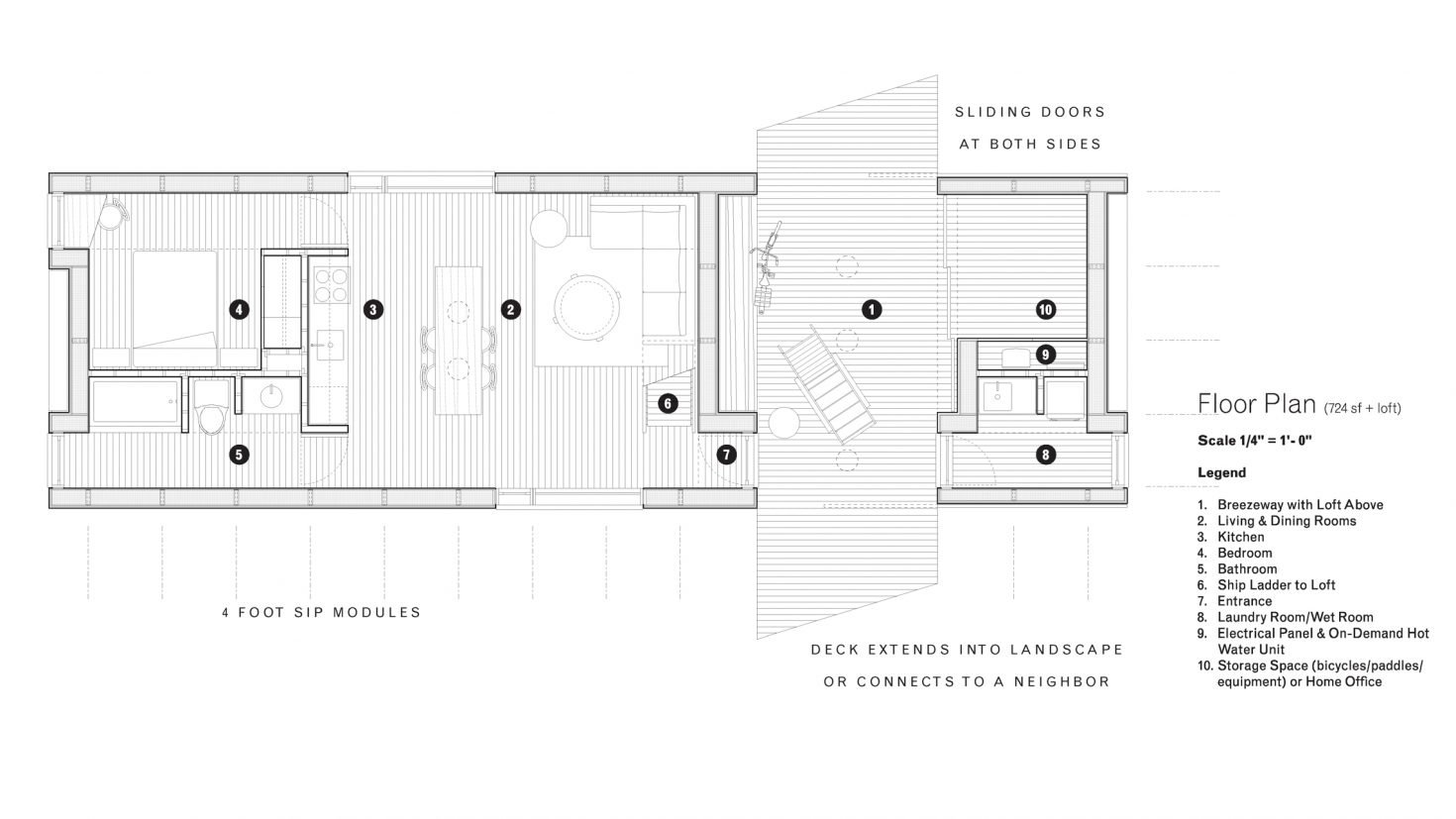 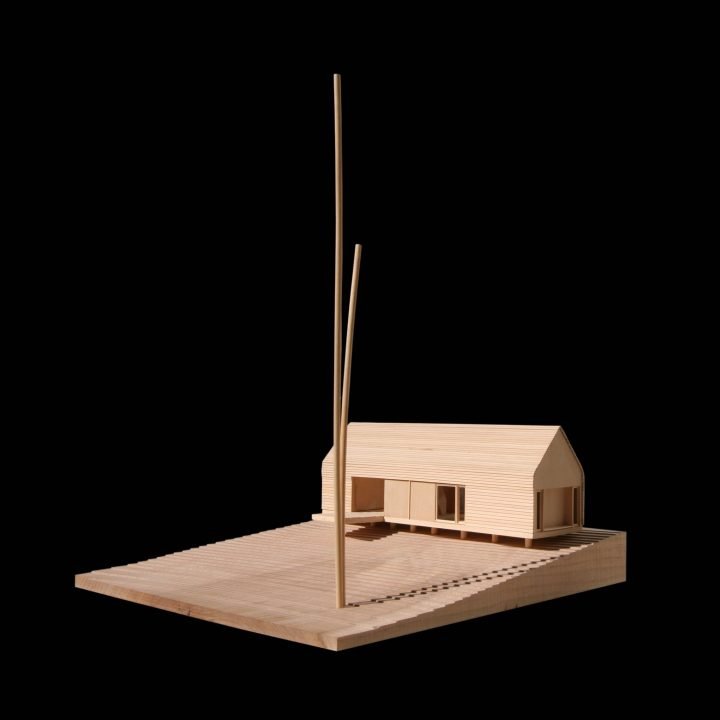 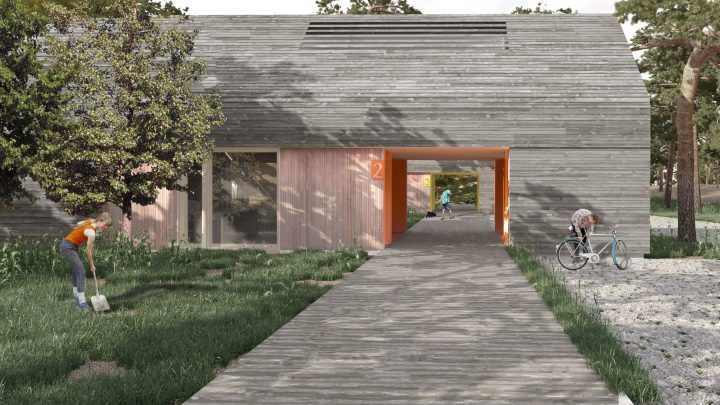 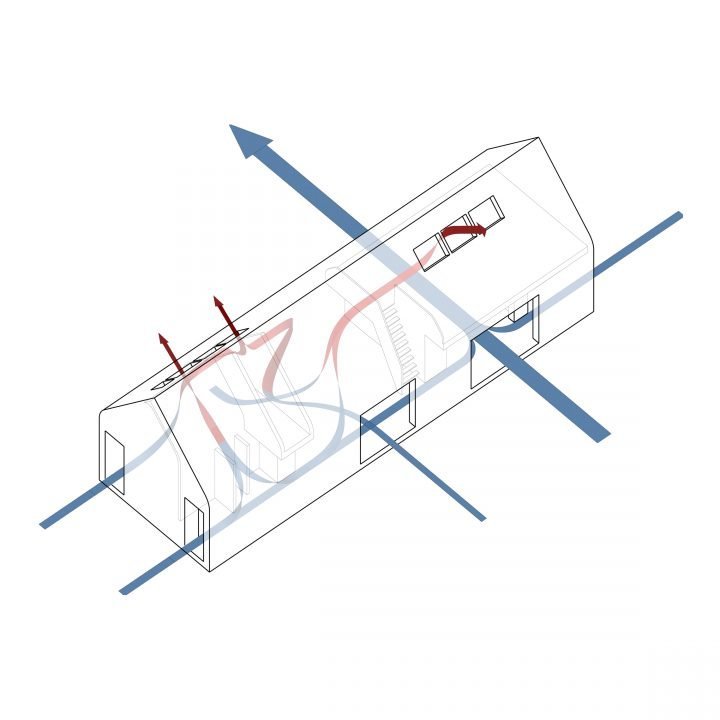 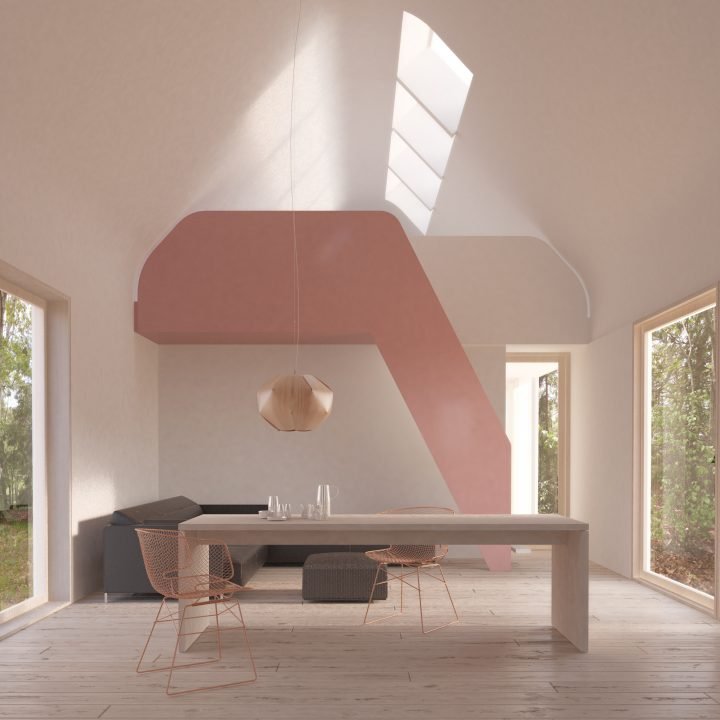