The Holocaust Education Resource Center (HERC), located at the University of Maine, mandates an architectural presence expressing the ideals of human rights and individual diversity achieved by establishing distinct relationships between exhibition spaces, the classroom and research center, and the surrounding community.

HERC is organized as a series of courtyards,resulting in syncopated openings to the sky and to the surrounding landscape. Education, exhibition, and social courtyards form reciprocal learning and sharing spaces. Central to the scheme is the exhibition gallery, which has a surface that references traditional Jewish paper cuts.

The paper cut became an important Jewish folk art during the 17th to 19th centuries in countries where it was practiced by the general population. Requiring only simple and readily available tools, paper, pencil and knife, paper cutting was available to all, even the poor. A paper cut was hung on the walls of homes and synagogues and served a range of spiritual and ritual purposes in the Jewish calendar and life cycle. Unfortunately, however, during the first half of the 20th century this tradition almost disappeared because the majority of its practitioners either emigrated or tragically perished in the Holocaust.

The pattern for the HERC wall was driven by a series of algorithmic scalar operations of which the mathematical randomness accentuates the individual elements while maintaining the visual uniformity of the pattern/field as found in hand-made paper cuts. 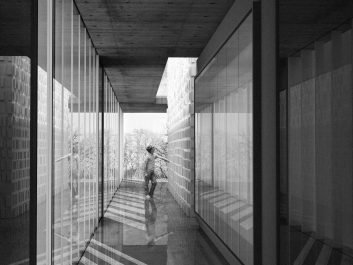 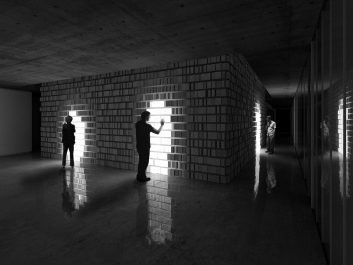