When Pilot Coffee Roasters opened the first roasting facility in Toronto with a Tasting Bar that is open and accessible to the public, the desire was to expose Pilot’s customers to the intensive process that takes sustainably grown green beans to the perfect brewed cup. A company that is endlessly innovative, they were the first in Canada to own and operate the Modbar system, and have recently added a canning line for milk-based cold espresso drinks to their industrial facility, also a first in the country..

This fall, the first branded retail outlet for Pilot Coffee Roasters has opened in Toronto at First Canadian Place. Building on the company’s branding developed for the Wagstaff Street Roastery, Williamson Williamson has designed the spaces to have its own character, yet share a common language of signature pieces with the Roastery. Sinuous oak coffee counters, folded metal accents – inspired by the folded paper airplane logo – and Pilot’s signature yellow, establish a palette that can adapt to create this signature retail location.

At the new Pilot Coffee Roasters space in the First Canadian Place Retail Path, an oversized window frames three bright yellow standing bars. It takes advantage of the shallow yet wide 1200 square foot space to invite in the passerby. The long retail frontage turns into a distinct advantage. Given the speed that commuters zip through the Path from the subway entrance through to their offices, the bright picture window captures their attention, then opens with entrances at each side, creating a flow through that allows for unencumbered movement through the retail space.

Once inside, a textural experience emerges. A varying sequence of materials creates a rhythm from entry and ordering, to pick up, and sitting with friends. Oak, in panel and picket form representing solid and veneer based construction, green walls at both eye level and floor to ceiling, and yellow and grey powder-coated steel panels are all activated by the busy activity in front of and behind the counter.

The curved tasting bar, which first emerged as the signature element in the Roastery, is present here in the retail counter, this time with a curved seven-foot-long pastry case highlighting the centre. Designed with a slatted white oak base that allows it to turn through the space while concealing the functionality of the equipment – which includes Pilot’s signature cold brew on tap – the counter creates pockets of space to be used by staff and customers and controls the movement through the space.

The curvature is picked up in the wood panels that anchor the space on either side with shelving units and hidden doors concealing service spaces behind. The folded metal elements, painted in Pilot’s signature yellow and grey, are bent into service as shelving, counters, a menu board, and the airplane bar, a five-foot-long cantilevered counter that is a nod not only to the company’s name, but the initial ‘boomerang’ coffee kiosk that was built for Union Station’s Great Hall. The robust panels of living wall are planted with Plumosa Fern, Golden Pothos, and Moon Philodendron. 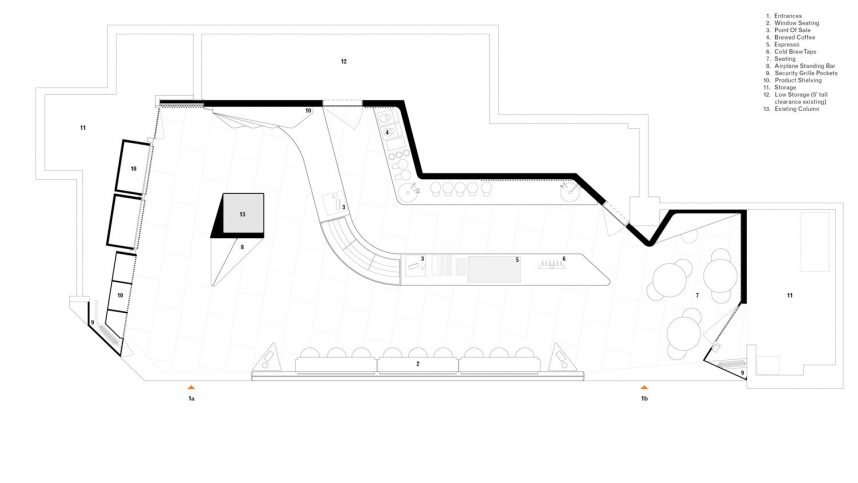 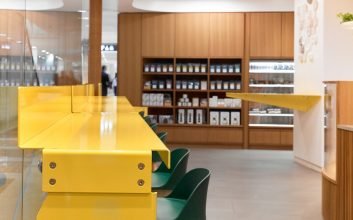 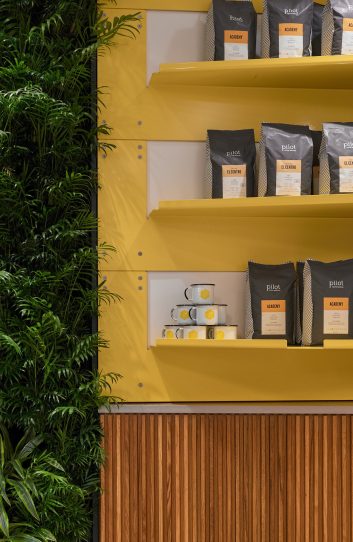 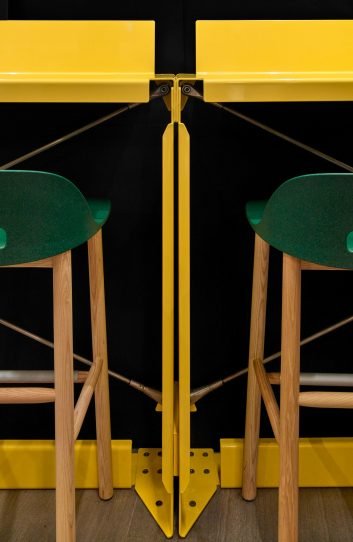